Priced Out: What is Affordable Housing?

Housing affordability is a burning topic, but the term first needs to be understood before it can be tackled in any meaningful way, argues Marcus Cieleback in a new report.

In the past two years, three of Europe’s most iconic cities – Barcelona, Berlin and Paris – have introduced controls to clamp down on spiralling rental prices. London is also considering controls, while Amsterdam has introduced draft bylaws to stop investors buying new-builds to rent them out expensively.

Housing affordability is becoming a hot button topic in ever more cities because it is hitting people where it hurts most – their wallets. Feeling themselves squeezed by increasing rents and housing prices, residents are making their anger felt through ballot boxes. Politicians are responding with policies aimed at dampening rental and price increases.

These policies will be self-defeating in the longer term even if they provide relief to today’s tenants, argues Marcus Cieleback, Chief Urban Economist at PATRIZIA, in a new report. “There is no denying there is an affordability problem,” says Cieleback. “But go beyond the anger, and you find that there has been no precise definition of what affordability is.”

In Priced Out: Europe’s affordability challenge, Cieleback explains that rising rents and prices are a result of urbanisation, a decades long trend. Given the impact of COVID-19, this will continue. Wages are likely to stagnate, rural migration to continue and housing costs to climb. For while the pandemic has had significant impacts on many areas of the economy, it has not reversed rising rents and housing prices, particularly for properties in the middle or lower end of the market.

There is no denying there is an affordability problem. But go beyond the anger, and you find that there has been no precise definition of what affordability is. This makes discussing the problem difficult.

After showing how rent control measures amount to bad economics if the intention is to ensure adequate housing to meet the needs of the population, Cieleback explains that that different social security systems and regulations means definitions of housing affordability depend on a country’s political system, the function of a city in the national/European system and on the historical housing perspective. At the same time, affordability is frequently connected to other policy areas, such as employment, environment and health.

Defining affordability is difficult, but also is measuring it. The standard method to measure it is to define a threshold value that housing cost should not exceed as a proportion of household income. However, when the thresholds are compared, differences emerge. In the United States, affordability is considered a problem if housing expenditures exceed 30% of income. Most partners in the European Housing Alliance use a similar benchmark.

In comparison, Eurostat, the source of statistical information for the European Union, sees households spending more than 40% on housing as overburdened. Finally, tenant organisations are increasingly targeting 25% as a threshold. Given the competing definitions, opinions have coalesced around a level of 30% as the default above which housing is considered ‘unaffordable.’

At best 30% is a rule of thumb. It requires adaption to the realities of place.

As Cieleback shows in the report, the differences in median incomes, average apartment sizes and rent levels between cities makes it impossible to arrive at a common pan-European affordability measurement. As median incomes at city levels are difficult to gather, he calculated a synthetic median household income from national data (see chart), assuming men and women work and earn the same in line with the median income. In addition, they have one child, which means the family needs a three-room apartment (living room, child’s bedroom, parents’ bedroom and kitchen as well as bath).

From this, a theoretically affordable rent for such a household based on the 30% rule can be calculated per city. The chart shows rents are above this threshold in all but a few cities depicted, given many households the feeling of a unaffordable housing market. While city level incomes actually might be higher compared with the national average, one has to keep in mind that net income data does not account for childcare costs and ignore the reality that one income earner in many families will primarily be focused on child rearing so will be prevented or, at best, hampered from earning income. Only Berlin, Rotterdam and Vienna appear to have affordable rents.

“At best 30% is a rule of thumb,” says Cieleback. “It requires adaption to the realities of place. This way, it and rigorous, sound analysis helps us understand the peculiarities.”

Affordability is really an issue of insufficient supply. European cities are simply not building enough housing, which constrains growth and makes them more expensive than they would otherwise be. For housing to be more affordable, supply must increase.

Cieleback says that if affordability continues to be an issue, then more city-dwellers will demand governments step in between developers and landlords and the renters. This will not be in the interest of anyone, least of all real estate companies who will face tougher conditions to doing business. A rethink of housing policy is clearly overdue and with it, a more nuanced discussion about how the private and public sectors can work together to ensure those who have long been part of the fabric of a city’s life are not priced out.

“The good news is,” says Cieleback, “that cities were created to live in, so solving housing issues is intrinsic to the nature of the city. 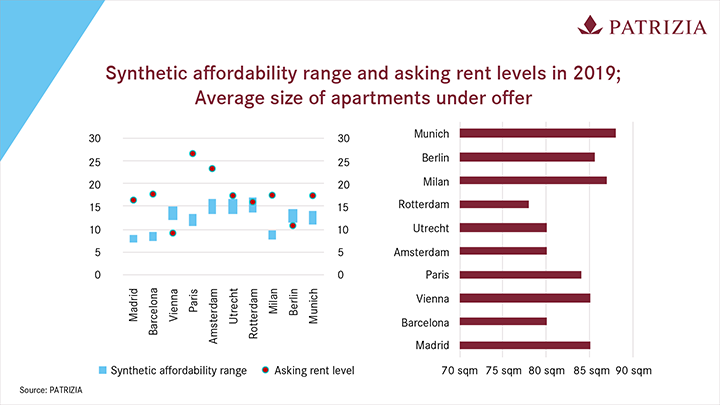 Why do long-term investors need to focus on cities

22@ - a test ground for the digital world

Priced Out: What is Affordable Housing?

How Do You Define Liveability?

Sex and the Cities

STAY UP TO DATE

Get unique insights into European residential developments and trends delivered straight to your inbox. Register for the PATRIZIA newsletter to receive city analysis, market insights and research data. Sign up now!